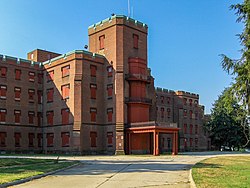 In the history books of psychodrama, St. Elizabeths Hospital in Washington, D.C., has a special chapter.

The venerable Saint Elizabeths (yes, no apostrophe) Hospital Psychodrama Department received the 2013 Collaborators Award from the American Society of Group Psychotherapy and Psychodrama.


Psychodrama was introduced to the hospital decades ago by James Ennis, one of Dr. J.L. Moreno's first trainees, and Dr. Moreno visited there to demonstrate his method. Dozens of trainees learned the art and craft of psychodrama there before moving on to training centers and their own practices and businesses. The psychodrama department was dissolved in the early 2000s, although a strong creative arts department continues to function. There is behind-the-scenes discussion to bring psychodrama back to the hospital.

St. Elizabeths Hospital is a psychiatric hospital operated by the District of Columbia Department of Mental Health. Founded in 1852, it was the first large-scale federally run psychiatric hospital in the United States. Housing several thousand patients at its peak, St. Elizabeths had a fully functioning medical-surgical unit and offered and psychiatric residencies. It has since fallen into disrepair and the grounds are mostly abandoned, although the east campus is still operational and it opened a new facility in 2010. Well-known patients include would-be presidential assassins Richard Lawrence (who attempted to kill Andrew Jackson) and more recently John Hinckley, Jr. who shot Ronald Reagan, as well as the successful assassin of James Garfield, Charles J. Guiteau. Other notable residents were Mary Fuller, James Swann, Ezra Pound and William Chester Minor, former Civil War Army Surgeon. 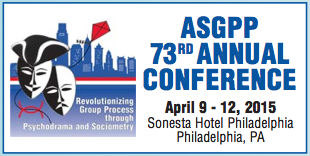 Do you want to write a book but have no idea about how to begin? I'll be presenting on this topic -- along with about 100 of my psychodrama friends -- at the 73rd annual conference of the American Society of Group Psychotherapy and Psychodrama April 9-12 in Philadelphia.

Here's the brochure blurb for "How I Wrote My Book(s)" for all aspiring authors and others.:

Karen Carnabucci, LCSW, TEP, will share her experiences with working with a major publishing company and self publishing – along with recommendations for finding a topic, book proposals, working with a co-author and more. Bring your questions for this interactive presentation and warm up to getting your contribution out into the world.

Early registration deadline for the annual conference is Feb. 13. Join us in Philadelphia!

For more on my books about psychodrama, constellation work and other action methods, see this link.
Posted by Karen Carnabucci, MSS, LCSW, LISW-S, TEP at Sunday, February 08, 2015

2015 Systemic Constellations Conference -- save the date! 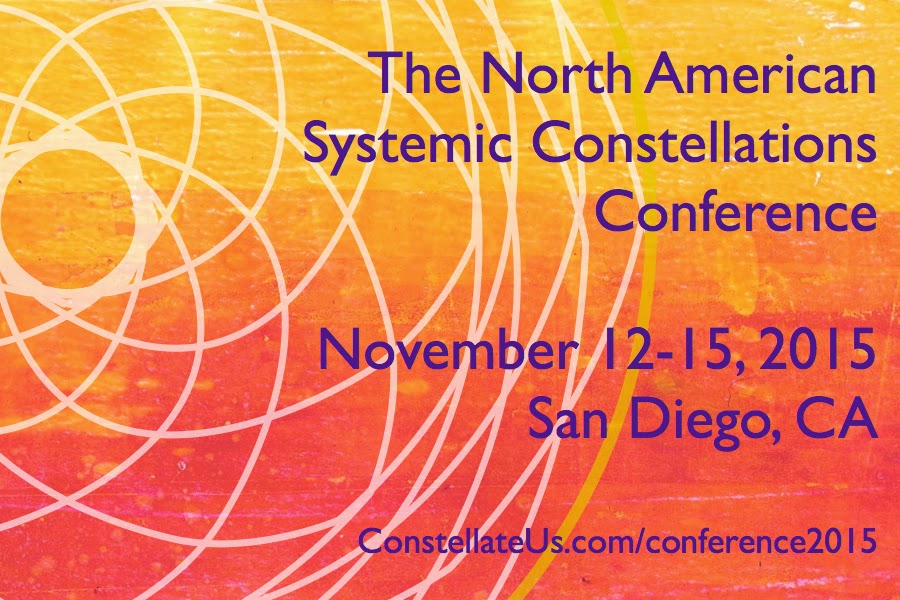 I have  a special fondness for systemic constellation work -- sometimes called family constellation work -- the alternative healing process that has been developed in the past 30 years by German therapist Bert Hellinger. My first book, Integrating Psychodrama with Systemic Constellation Work: New Directions for Action Methods, Mind-Body Therapies and Energy Healing, explored the similarities and differences of psychodrama and constellation work and how one enhances the other. I've come to look at constellation work, which focuses on the energy of the "field," as a kind of energized sociometry -- with the roles that we play as form of solidified energy. This approach as really impacted the way that I use psychodrama and alter it for various people and groups.

A call for presenters will be coming soon. In the meanwhile, save the date now and find out more about this conference with this video:

Thanks to the Racine Journal Times, which interviewed me about my newest book Show and Tell Psychodrama: Skills for Therapists, Coaches,Teachers, Leaders. I'm always happy to talk about psychodrama and action methods. Read the Q&A here.

Psychodrama conference catalog is out!

Right now! Check out the conference catalog of the American Society of Group Psychotherapy and Psychodrama, happening April 9-12, 2015 in Philadelphia. A slew of presenters (I'm proud to be on the list!), plus keynotes, awards ceremony, silent auction and more. Details here.

Attorney Gerry Spence, one of the foremost advocates of psychodrama, talks about the importance of creating relationships in the courtroom. He is the founder of the Trial Lawyers College, which trains hundreds of attorneys in psychodrama.

Fun and colorful look at: "What is psychodrama?"

Super-cool video has just been produced by friends and colleagues at the Sociometric Institute in New York City that answers the question, "What is psychodrama?" Enjoy... 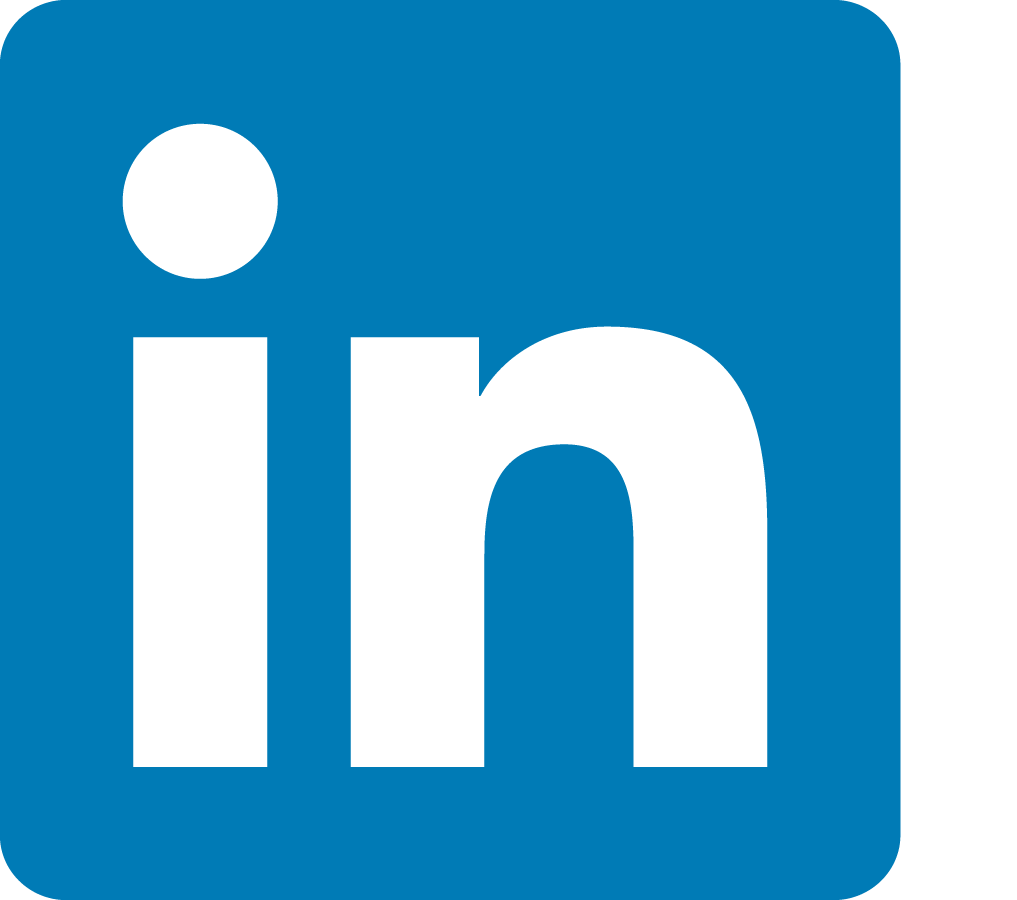 Some topics related to psychodrama and sociometry include:

If this interests you and you are subscribed on Linked In, please feel free to follow, share and comment.
Posted by Karen Carnabucci, MSS, LCSW, LISW-S, TEP at Friday, September 05, 2014

Arizona mini-conference coming up in October 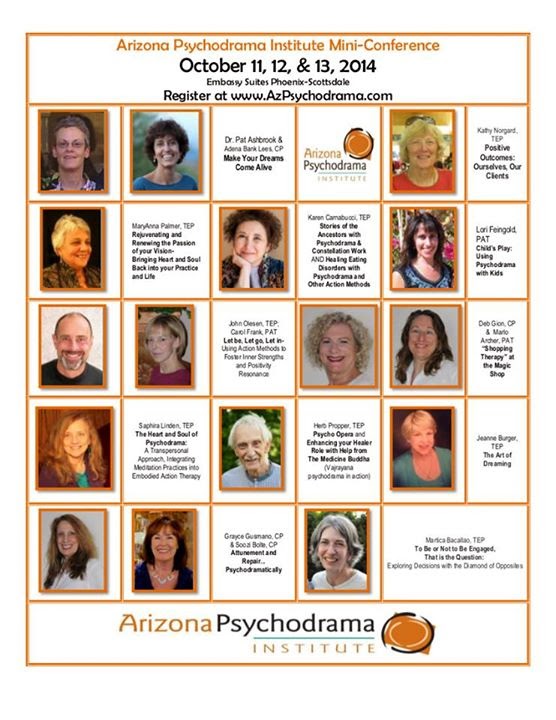 Pleased, proud and honored to be among the 16 psychodramatists who will be presenting at the upcoming psychodrama mini-conference on Oct. 11-13 in Scottsdale, Ariz. The  mini-conference is sponsored by the energetic Arizona Psychodrama Institute, which has been recently firing up interest in the state, offering both short and residential programs.

Learn more about the conference schedule and sign up here.


Sergio Guimaraes, a psychodramatist from Argentina, recently visited the United States to gather material for his Ph.D. thesis, and interviewed Zerka Moreno, the mother of psychodrama, as part of his research. Zerka, now 97 and living in a nursing home in Rockville, Md., talks about learning and teaching psychodrama.

My newest book Show and Tell Psychodrama: Skills for Therapists, Coaches, Teachers, Leaders, is now officially available for purchase, reviews and recommendations. It's available in paperback and Kindle versions. 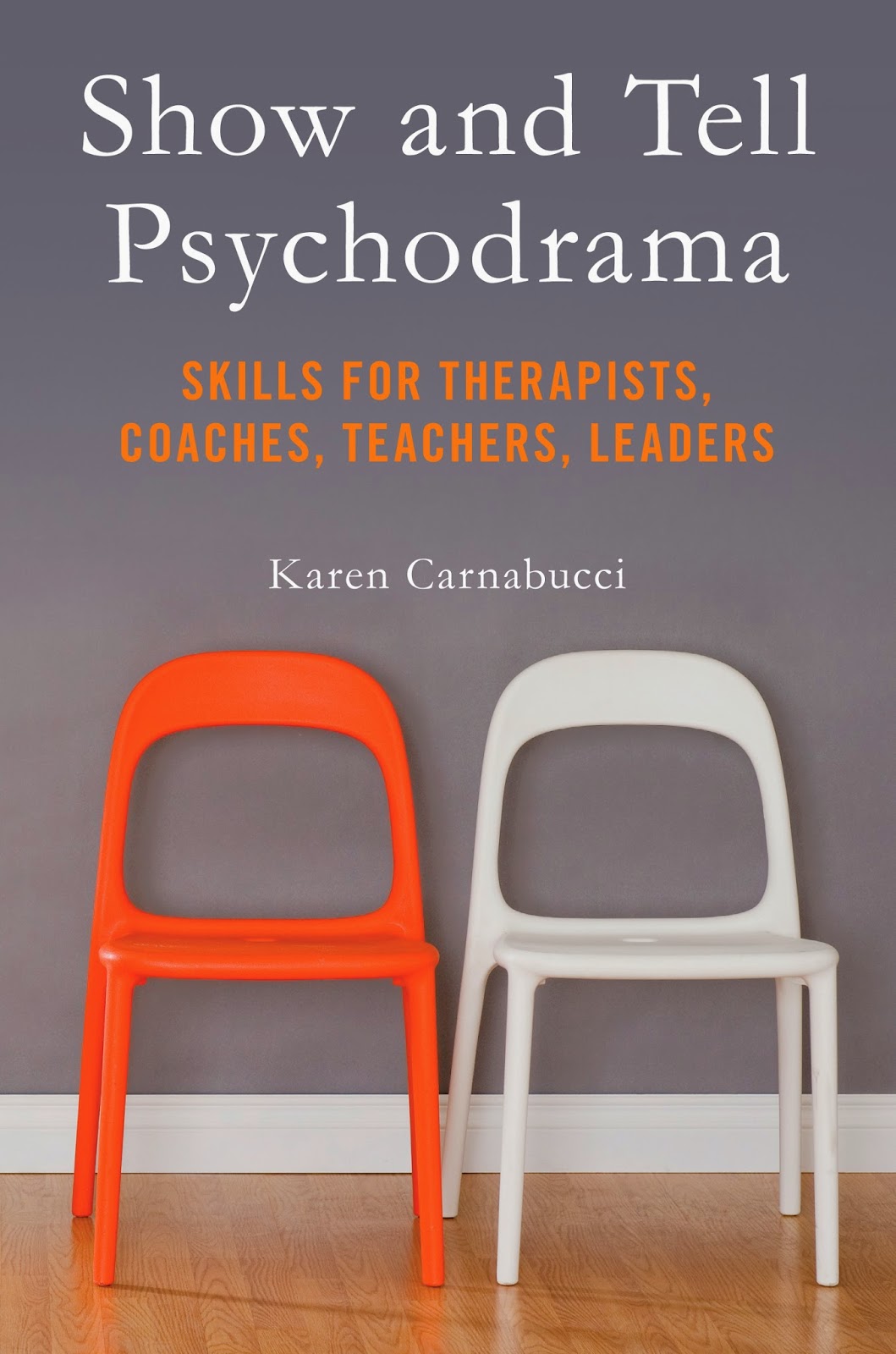 Whether you are a curious professional seeking new skills or a student just beginning to fall in love with this amazing method, these 60 bite-size articles give you an easy introduction to fresh ways to support healing, learning and change.

Show and Tell Psychodrama will help you learn how to:

- Spark creativity and spontaneity within you and the people you work with
- Lead safe and effective role plays - from classroom to corporation
- Create authentic relationships in groups in every setting
- Take your role as a leader and understand and manage the roles that others play.

Just a few of the specific topics are:

Extra bonus: Special section for the psychodrama certification candidate to navigate studying for the national exam with the American Board of Examiners in Psychodrama, Sociometry and Group Psychotherapy.
Posted by Karen Carnabucci, MSS, LCSW, LISW-S, TEP at Tuesday, June 10, 2014

Co-author of Healing Eating Disorders with Psychodrama and other Action Methods: Beyond the Silence and the Fury.

Visit my site at Lake House Health & Learning Center and subscribe to my professional e-mail newsletter.


View my page on Social Networking for Therapists - TherapyNetworking.com